The third episode starts with Woo-Hyun drowning and Seul-Bi jumps in and tries to save him, Sung-Yeol also comes along and jumps in and yells for him to stand up because the water is only waist deep.

The next morning Woo-Hyun realizes that his necklace is gone and he doesn’t know it is in the pool. He fights with his grandma and she tells Seul-Bi that the necklace was given to him by his mom and is very important to him. His grandma needs medicine and then asks Seul-Bi if she wants to go to school and she says yes. She goes to do her paperwork and a man stops her and switches with her paperwork. She meets her Sunbae and he questions whether she wants to stay as a human. The bully bothers Woo-Hyun at school again and the teacher walks in with Seul-Bi and she goes over and bites the bully. She is introduced as a new student and she tells him that she lives with Woo-Hyun. She gets to sit next to him and some girls become jealous and scheme to bully her.

The group of girls bully her in gym class and start throwing the ball at her and give her a nosebleed. Woo-Hyun stops a ball and drags her outside and scolds her for not realizing that she was being bullied. He gives her tissues for the blood and the teacher catches them thinking they were being romantic and makes them clean the library.

Woo-Hyun talks about not caring about the necklace and Seul-Bi can hear the change in his voice and realizes he is lying. After school Seul-Bi goes to the pool to try to find his necklace and Sung-Yeol helps her get the key to get in. Seul-Bi tries looking but can’t find it and she goes to work. Woo-Hyun goes into the pool to find the necklace and finds it thinking that is Seul-Bi’s necklace. The two bully girls from school call Woo-Hyun’s grandmother’s place for food and Woo-Hyun and his friend walk into the cafe and the girls hide from them.

The girls leave when Seul-Bi goes to the cafe and at the cafe the worker is being harassed by a man. Woo-Hyun tries to stop the man but gets pushed down. Sung-Yeol father the policeman is walking by and hear the cries and come in. They grab the guy and he says he her father and she says he isn’t and then tells them that as a father he takes her money and gambles it away not taking care of her and the cops take him away.

Seul-Bi tries to reassure the girl but she tells her to leave and is angry. As they are leaving Woo-Hyun gets a call from Sung-Yeol for Seul-Bi and she runs off to meet him. Sung-Yeol has the necklace at home and his stepmom comes in and sees it and recognizes and asks which friends it is but he doesn’t tell her. Seul-Bi and Sung-Yeol meet and gives her the necklace and tells her that she owes him tea but she hears the word car instead and they go to an arcade and play a racing game. She then buys a miniature car for him from a machine and they go home. 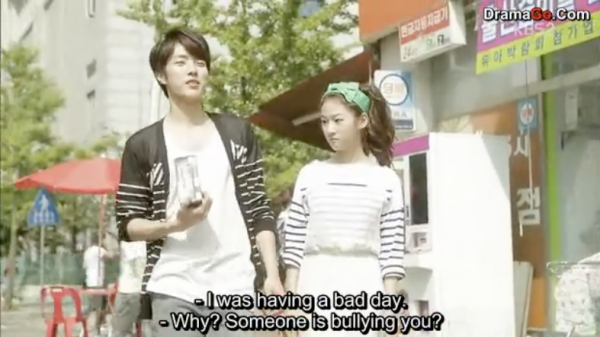 Woo-Hyun goes shopping for his grandmother and meets the guidance counsellor/stepmom and she asks what his name is again and follows him to his restaurant and hides when his grandmother looks her away. Some teachers come to the restaurant to eat and the music teacher likes the nurse and the nurse likes the foreigner teacher. Woo-Hyun goes to find Seul-Bi and as she is going home she drops the necklace when she is almost hit by a bike and lands in the sewer grates. As she picks it up someone throws water at her and she drops it in. She tries to use her powers to lift it up and her Sunbae watches her from a distance. Woo-Hyun then sees her walking and she seems weak and he runs to her and she shows him the necklace and puts it on him. He says thanks and pats her head and then notices that she smells.

She then sees her Sunbae and starts running to him and Woo-Hyun turns around and seems to see something and this ends episode 3.

The third episode was only aired this week because it wasn’t aired last week. So it seems like Seul-Bi’s Sunbae seems to have a crush on her because of the way he is always looking out for her. He almost seems to be annoyed that she seems to be fitting in as a human and maybe is jealous of Woo-Hyun. This school plot with the girls bullying another girl for being close to the popular boys seems like a cliche plot line. I wish the used the angel angle more I mean not having powers seems like they are taking away the most potential interesting part of the plot. I mean I would enjoy more background information on the angels and her Sunbae and wish they would play up that part more. So Woo-Hyun’s mom must be the Sung-Yeol’s stepmom. I wonder why she wouldn’t have recognized her own son and why are they estranged? Seems like there is an interesting story behind that. It sure made me nervous when she carrying around his necklace so carelessly and of course then she drops it! It is not a good sign that Woo-Hyun’s grandmother is sick and they keep showing that and I wonder if that means Woo-Hyun’s mom is going to have to help him if she get really sick? I really wonder if Woo-Hyun was able to see what Seul-Bi could see? He seems to be shocked about something?