In Flower Boy Next Door the plot of the drama is Go Dok Mi is an editor that works from home and tries not to leave her apartment  if she does not have to. Next door there is two men Jin Rak and Dong Hoon they create webtoons and Jin Rak has a crush on Do Mi. Enrique is a game creator from Spain and he moves across from Dok Mi’s apartment and he catches her looking into the apartment and he confronts her and forces her to face things she doesn’t want to.

I really enjoyed the drama Flower Boy Next Door drama and found it to be refreshing. I found that the main female lead played a very different type of character than what it normally portrayed. The female was not bright and innocent and magically fixed all the problems in other peoples life and was clueless to her own and she doesn’t bring sunshine into sullen male lead’s life.  It felt like a reversal that the male character had more of the traits just mentioned. It also feels like I haven’t seen this female character for a long time, although I am sure that there are other female leads that have portrayed this character before.

Personally I could connect to Go Dok Mi’s character and the way she thought. I have not had a traumatic past like she did from high school friends turning on her, but I think that it does seem easier to hide away than to expose yourself to criticisms from others. I am more introverted and feel like people do not value these type of people and instead make it seem like there is something wrong with them. Go Dok Mi is obviously on the extreme end not allowing any one near here and I enjoyed the journey of her being drawn out of her apartment and into the world. One quote from her in the drama was  “When she goes out into the world, that woman often becomes invisible. When she gets pushed aside by shoulders, stepped on by feet, and stuck in between the lines, she feels like she’s not visible to the world. So she hid in her room. The small room was soft and comfortable, like a nest to a bird that’s injured its wing. In that space, that woman can breathe freely. She never once missed the outside world or dreamt of it.
At least until now…
At least until now…
At least until now…
At least until now…”
I can relate to this quote because outside in the world, what you want and what you need is not most important there are people around you and you can not just be worried about yourself. At home you are the only person in this world and you can be selfish and not have to worry about others and dream without being held to your fleeting thoughts. She has lots of good quotes through out the drama and I have enjoyed these observations.

The male leads are all very good and I personally would not have minded if she picked either Enrique or Jin Rak!! I liked them both. They both tried to understood Go Dok Mi and wanted the best for her. Enrique I liked for the most part but there were times when he tried to be overly cute and it just seemed a bit overacted and it would be a tad irritating. I think it was one he would do his loud weird laugh that I wished he would just tone it down. I really liked his character with Go Dok Mi when he was normal and sincere and was just a little bit cute. Jin Rak I loved the rings he wore!! He was the manly type that was not very forward, but I enjoyed how he tried to take care of Dok Mi. 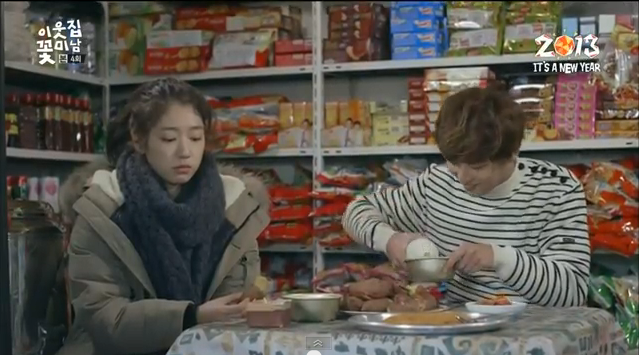 What I really enjoyed about this drama is the connection that Dok Mi and Enrique have and how they could read each others mind. It was just a little cute thing that I really enjoyed and loved to watch them interact. I really also loved all the side stories that helped this story not get too stale and instead created little interests and mysteries all over the place. The little mysteries really did keep me watching and the funny minor characters were also very interesting and well acted. I loved that the ending had a 1 year later time period where you can see the progression quickly and you can see into the future. I LOVED that in this Korean drama that they did not leave the other love interest out to dry with nobody. They gave everyone an interesting and meaningful ending that really made my heart sooo happy. If I am going to commit to a drama I do not want to see a crappy ending where everyone is unhappy!! I am impressed with this drama.

What I did not care for as much in this drama was particularly the beginning with Go Dok Mi who looked like stalker and creeper at the beginning of the drama and I could see why some people would not continue with the drama after the first episode. Thankfully that ended quickly and they did not really make her into that type of person for the rest of the drama. The first kisses in the drama where a little lackluster but thankfully they were all redeemed at the end!!

Overall I really enjoyed this drama and I would recommend this drama to everyone who loves a good romance story and does not mind a little bit of cheesiness and happy endings, which I always crave for in a drama. I started watching That Winter, The Wind Blows but I read that it is going to be a tragic ending and I do not think that I can continue if there is dying and sadness. I guess I will wait until the ending is aired if it is tragic I won’t both watching but if by some chance it is not tragic then I would continue it. If you have not checked out this drama I would highly recommend that you check it out and you will get all the warm and fuzzies you need!!