The 6th episode starts with Jin-Hoo going to Jung-Soo’s shop and while he is there he sees a photo of a young Jung-Soo and he recalls when he was young and he confronted her about stealing the bag design. He remembers going to Shin Hwa group and seeing the picture taped to the window and he went back to her stand and she wasn’t there because she was busy with exams. He tells her instead of paying him back he wants her to design and make him a new tablet cover and she agrees happily.

At home Jin-Hoo finds the picture of Jung-Soo and then finishes his math problem which helps him relax. Manager Kang goes to meet Jung-Soo and they have coffee and he tells her that she has lots of talent and that the only reason she did pass was because of her lack of presentation with her portfolio. She tells him that he has encouraged her and that if another challenge approaches she feels more confident. She also asks about Jin-Hoo’s tastes but then doesn’t let him answer and leaves it.

Kyung-Hee tells her adoptive parents she wants to move into their house in Seoul and they agree that it would be okay. Jung-Soo finishes designing the cover and goes and buys some expensive italian leather and starts working on it. The team is introduced for team Luna.

Jin-Hoo texts Jung-Soo during the meeting asking if she is working on the cover and she texts back that she will finish today and he can come get it. Ah-Ra one of the designers on the team suggests going to clubs  to survey the market and everyone agrees to this. Jung-Soo gets a text to meet him at the golden gate club while she is at her friends rental store and while they are there Ah-Ra comes in and returns the clothes she rented. Ah-Ra gets more clothes and accessories for going to the club tonight. When she leaves her friend tells Jung-Soo that she is obsessed and yearns for expensive items but cannot afford them. Do-Young is writing a letter to Kyung-Hee and writes she will wear the carnation for parent’s day. Everyone is at the club and they go dancing. Jung-Soo goes to the club but is not let in because she is not dressed up. She tries phoning Jin-Hoo and he eventually answers and comes out and drags her into the club room. She gives him the cover and says it is not his style and he refuses to tell her what he likes and suggests she needs to follow fashion and trends and that he wants her to make a new one. 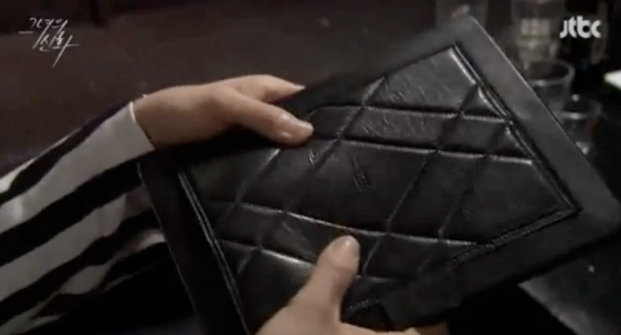 She gets a nose bleed and then runs out of the room with kleenex. As she leaves Ah-Ra sees her and thinks she was crying and then sees Jin-Hoo run after her.

Ah-Ra tells everyone when they gather that Jin-Hoo left with a girl who was crying. Kyung-Hee then decides to leave after she heard Jin-Hoo hat left and says she has a migraine. Manager Kang follows her and says he will drive because he knows how she can’t drive with a migraine she refuses and leaves. Jin-Hoo finds Jung-Soo and pulls her in and she falls alseep so he has to look up her address from her resume. As she is sleeping her neck keeps falling so he puts a pillow around her neck.

When Jin-Hoo takes her home he sees Kyung-Hee by the house and standing outside he recognizes her and she makes up an excuse saying that she likes the view here and then she leaves. Jung-Soo wakes up and leaves. The next day Kyung-Hee tries to suck up to Jin-Hoo but it doesn’t work. Manager Kang sees this and then is reminded of when they used to date and she got a migraine and he gave her a piggyback.

Jung-Soo at the shop is told by Kyung-Ho that the man that rents out their shop went bankrupt and got involved with loan sharks and that means they are going to lose their shop.

Jin-Hoo is trying to text and phone Jung-Soo but she hasn’t replied to him in a week so he goes down to her shop and finds it is closed down and is told by others what happened. As Jin-Hoo is driving down he sees Jung-Soo and Kyung-Ho selling their bags on the street and they are doing it illegally.

The cops come and she pushes all the bags she can into a big bag and runs and Jin-Hoo pulls up and she gets in. He gives her a hard time for not making him a new cover and she says he will have to wait until her family situation is better.  He drives her home and she thanks him for helping her and he asks if she wants a job at Shin Hwa and she agrees. Manager Kang tells Jin-Hoo that he needs an assistant for the team and Jin-Hoo is then relieved because there is now a job for Jung-Soo. The president of Shin Hwa tells Director Choi that he will be stepping down soon but he wants it to be a secret and the Director Choi is secretly happy about this.  Jung-Soo comes into the company and is hapy for the part time assistant job and when Kyung-Hee sees her working she gets mad at the manager for hiring and then complains to Manager Kang.

As Jung-Soo works she runs into Manager Kang and they are happy to see each other.

Do-Young is driving and she all of a sudden remembers Jung-Soo runnning down the road to her car begging for help. Do-Young calls her husband and tells him that she remembers. Jung-Soo is called into Kyung-Hee’s office and she says it has been a while Jung-Soo and Jung-Soo asks if she really is Kyung-Hee and this is how the 6th episode ends.

This drama is coming out strong! I really hope that they will be able to keep the interest and drama going for all of the episodes. I just realized that it is not a drama without amnesia !! it seems a bit cliche but yet it is quite effective to keep the plot interesting. I wonder if she got all her memories back or just that one of Jung-Soo. I wonder what Kyung-Hee’s goal is to admit that she is Kyung-Hee to Jung-Soo? maybe she will just pretend that she has come to Korea to work and that she is just living alone as an adult? I mean it would be hard to keep it a secret if they talk about her dad running the company she works for? or maybe she will just tell her the truth and that there is nothing that Jung-Soo can do about it now?

It seems like Kyung-Hee either has a crush on Jin-Hoo or she wants his attention or to get on his good side but she seems to be failing at that because she is too boring. Jung-Soo has obviously left a mark on him by leaving the photo on the window and seems to be interested in her. I wonder if that is the love triangle Kyung-Hee likes Jin-Hoo and Jin-Hoo likes Jung-Soo. I know that Manager Kang has to get in the triangle somewhere. He has hit it off with Jung-Soo and is nice to her so therefore they will not work out together. Manager Kang obviously is hung up on Kyung-Hee but she seems to dislike him now so maybe they will end up together again or Manager Kang will end up alone! It is so hard to wait for the next episode!!